In 2011 BoDean Company became the first quarry in the world to fully operate under its own photo-voltaic (solar) power at its Mark West Quarry. This photovoltaic system is expected to generate more than 1,120,000 kilowatt hours of renewable energy each year. The electricity produced by the solar panels will offset enough energy to power 160 typical American homes for a full year.

This system is composed of three solar electric arrays of 3,444 solar panels in a series of 14 modules, an internet-based monitoring system to measure performance, and an automated programmable solar panel cleaning system. 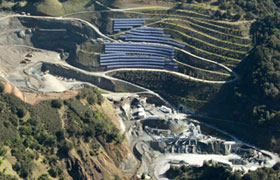 World’s First 100% Solar Powered QuarryIn addition to needing electricity for crushing and conveying the rock at the quarry we also require energy to run our on-site wash plant, which is used in washing rock for certain types of products, such as sand. Over half the energy consumed at the quarry goes toward operation of the wash plant.

Also in 2007 we installed a 22 kW photo-voltaic (solar) power system at our main office building at North Dutton Avenue in Santa Rosa.

A reduction of GHG of over 900 tons per year, reduced energy consumption from non-renewable sources, monetary savings which leads to greater profitability and depreciation tax liability